Peter Shilham is a long-standing resident of Emmbrook, a former teacher at The Emmbrook School, and a member of the committee of the Emmbrook Residents Association.  He is also a keen student of local history, and he has written – to date – a series of six books on the subject.  The books have been published by ERA and copies have been given free of charge to Association members.  They are also on sale to the general public, priced at £4.00 per volume, plus postage and packing at cost (if appropriate, although Peter has gallantly volunteered to make local deliveries by hand, with the aid of his trusty bicycle!).  If you are interested in obtaining copies, please use this link to email Peter to check availability.

The ongoing series of booklets details the story of what is now part of Wokingham but which started as a separate hamlet known variably as Embrook, occasionally Emmbrook, but in some instances as Turnbrook Ground. The present spelling was settled upon after the Second World War. 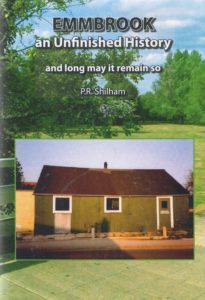 While the first in the series, “Emmbrook An Unfinished History”, deals primarily with the Village Hall and its part in the social history, C19th and early C20th topics are revisited as more is discovered.  The Village Hall site was the location of the first Emmbrook School dating from at least as early as 1858 although there are references for it in1831.  The School Room was added to by an Iron Room in 1887. Mothers’ Meetings, Men’s Reading Rooms, Sunday School, Temperance Meetings, Village Concerts, etc are all described as the village expanded with the support of local benefactors. Â Finally came the development and rebuilding of the Village Hall. 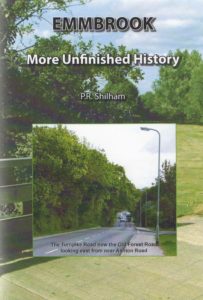 The second booklet, “More Unfinished History”, contains information on the environs of Embrook such as Toutley, Matthews Green House, Bill Hill and Emmbrook House.  Early inhabitants (names such as Allum, Challis, Douglas, Eamer, Hawkins, Knapp, Langley, Priest) are introduced, notable families, the early benefactors (Leveson-Gower, Nicholson, Heelas and Vialls) as well as those from Toutley Hall (Skinner, Dunne).  The most sorry tale of a father, severely mentally disturbed, murdering his 4½ year old while visiting his wife in Emmbrook starts to unfold – a fuller description will follow in a future booklet. 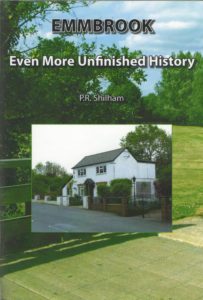 The third booklet, “Even More Unfinished History”, expands on families in Emmbrook with the addition of Dance, Lee, Trinder and Yalden.  Some Court cases involving Emmbrook are described (a drunken fracas at The Dog and Duck, vandalism on the railway line in the region of Lowther Road, child abuse, theft from Toutley Hall).  There is a list and biography of those who were in the Services (particularly involving the two World Wars) as well as coverage of cricket and football in the village. 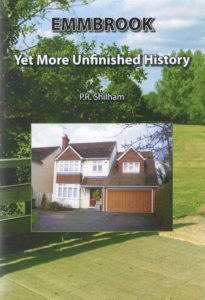 The early development of the present Emmbrook School features in the fourth booklet “Yet More Unfinished History” as well as more on the Emmbrook Sports Club. Â The link with World War 2 is made with Toutley Camp as it changed afterwards into the housing in Toutley Close.  The incredible story of the connection with a family involved in an unhappy marriage leading to false certification of lunacy (a change in the Lunacy Laws resulted) and hearings in the High Court and resulting in divorce makes for compulsive reading. 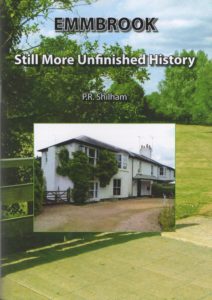 The fifth booklet (Still More Unfinished History of Emmbrook) commences with details connected to Toutley Hall: the earliest references found so far, some of its occupants, including Walter Collis Lowther, Major Terence Dunne whose wife organised the collection of eggs for the troops in World War 1, Edmund Beecher Skinner, Major Thomas Herd owner of Wokingham Plastics, and before each of these the authoress of the book “What Must I do to Get Well?”

Various misfortunes are related such as the biting of one of the Challis family in 1889 by a rabid dog, an accident at Emmbrook Paper Mills in 1890, the unhappy demise of Mary Sadler’s mother in 1874.  The Wokingham Fire Brigade had many call-outs to Emmbrook quite apart from the infamous event at Emmbrook Mill.

Embrookers featured in the Magistrate’s Court not infrequently (larceny, drunkenness, domestic violence, discharging a cracker near the public highway, riding a bicycle without lights).  Nothing was “off limits” – even part of an oak tree was stolen.  An example of the efficiency then of the police in apprehending thieves is revealed in 1887.

Celebrations on the Coronation in 1911 are described with Embrookers named in the sports events.  ERA inspired Christmas lunches for senior citizens from 1978, village hall quizzes, the St Nicholas Community Church, Women’s Institute occupation of the Village Hall are all recounted.  There are illustrations connected with Emmbrook including the copy of “The Crucifixion” by Gaudenzio Ferrari (1513) once kept in the old “Tin Tabernacle”. Where is it now? 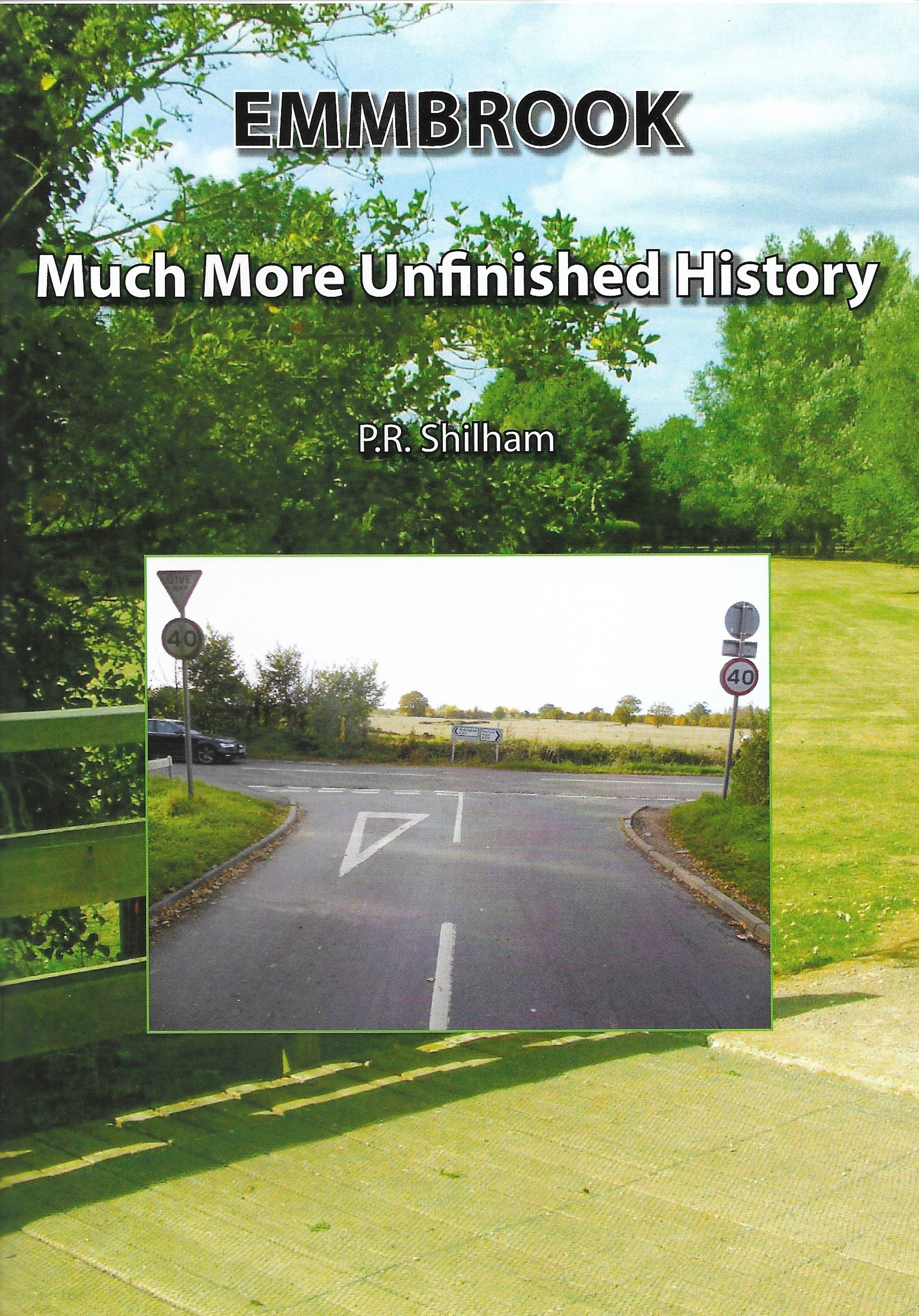 The sixth book (Much More Unfinished History) contains items on Matthews Green House, an inventory of its contents in 1831 and showing its social importance nationally in 1892 with a Grand Band Contest. There is detail of the development of Emmbrook and a commentary on the history of a house in Emmbrook Road revealed by a series of sales from sale of the land in 1905.
There is more petty crime including poaching which involved a member of the Emmbrook Cricket Eleven. Both the football and cricket teams feature in reports of their matches in the early C20th .
The owner and occupier of Bill Hill feature at the time of an incidence of Tractarianism at Hurst and there is further information on the Vendors of the Village Hall site in 1867.

Being the 65th Anniversary of the ending of the Korean War in July, there is a record of an Emmbrook man who fought with the “Glorious Glosters” at Imjin River.

Tabernacle”. Where is it now? 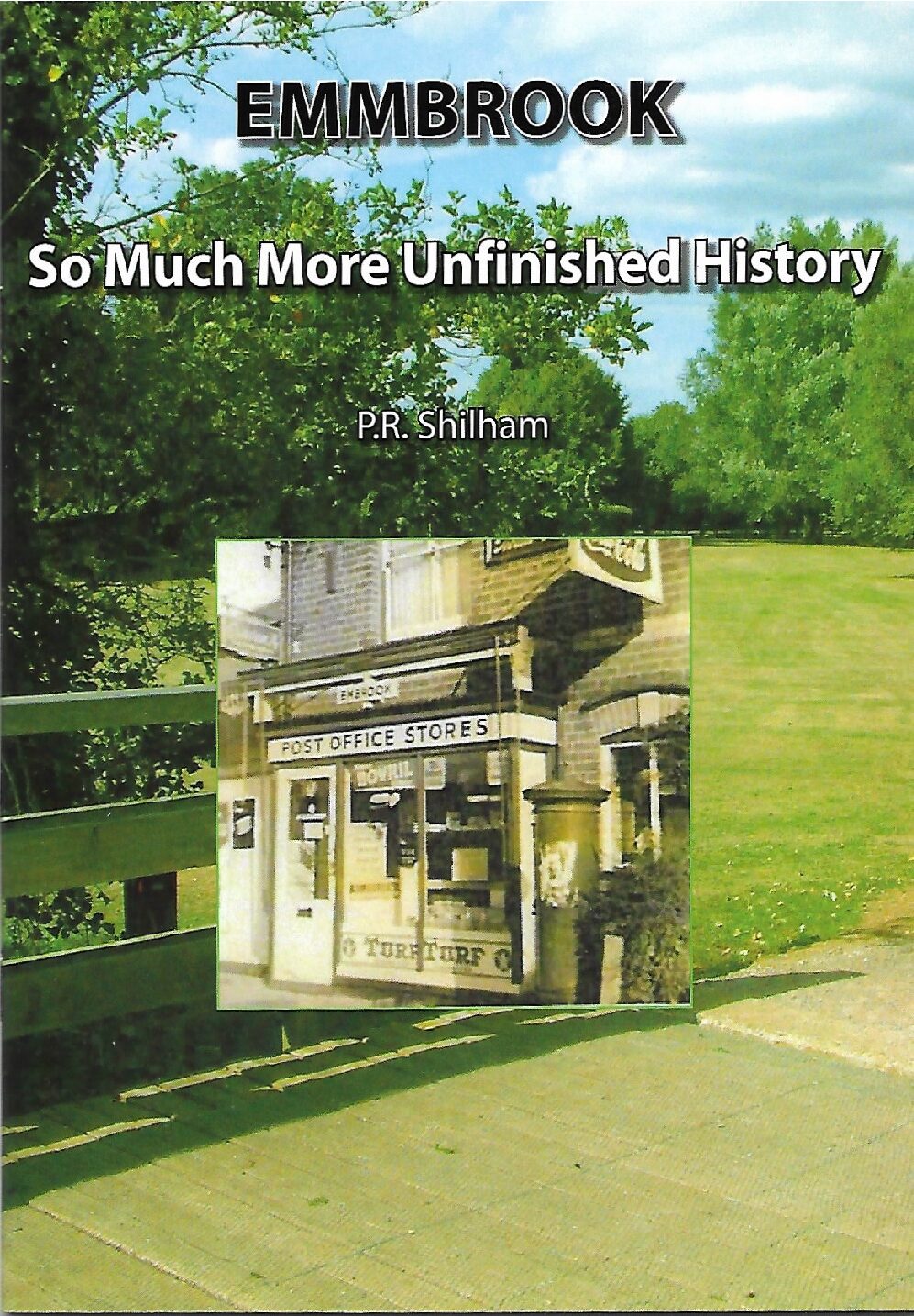 The seventh book (So Much More Unfinished History of Emmbrook) describes some of the Civil Defence organisation in WW2 as it affected Emmbrook men, who they were and their role in the war.  Women too were involved as members of the Volunteer Aid Detachment.  There is an account of an Emmbrook soldier killed during the Liberation of France.  Included is a description of a local event during World War 1 concerning what is now known as The Rifle Volunteer.  There is a further account of house occupancy in Emmbrook Road, this with much help from Geoffrey Marsden.  This complements details provided by the late Peter Nicol that appears in an earlier volume.

Embrook Post Office features with valuable contributions from Sanje Odedra including a press photograph supplied by the late Richard Dadd showing damage done in a motor accident.  Then there is how the motorway stopped a burial ground for Wokingham, plans for Toutley, sewage treatment at Ashridge and, of course, more naughty boys of Emmbrook are not to be missed.

Peter has already received contributions of stories and pictures connected with the hamlet, village and then Wokingham suburb of Emmbrook, but more would be welcomed for future editions of our history series.